The Benefits of Selling Standard and Professional Versions

by Steve Wortham
In February I posted a question on the Regex Hero Blog, which trial experience do you prefer? There aren't a great many people who read that blog so I only got 3 votes, but they were unanimous...

3 votes is not as conclusive as I'd like but I did think it was interesting that everyone preferred the full-featured / nag popup approach. This was a surprise because I thought everyone hated popups. In addition to this bit of information, I learned something valuable about marketing from Dan Ariely. From his book Predictably Irrational, he states, "When Williams-Sonoma introduced bread machines, sales were slow. When they added a "deluxe" version that was 50% more expensive, they started flying off the shelves; the first bread machine now appeared to be a bargain."

So the past few days I've been working towards a solution that I'm hoping will make most people happy while also resulting in more sales. Essentially I've ditched the free-but-limited version entirely in favor of a new "Standard" version which sells for $10. The Standard version has more features than the free version it replaces, but not as many as the professional version. And like the free version, the standard version is what people will be using when they first come to the site, except that they'll see this old nag popup every 5 minutes... 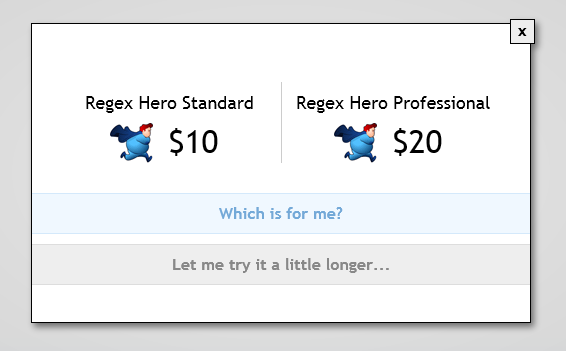 The whole nag popup thing is annoying, but then again so is a limited trial. At least the nag popup has some advantages. Because you can close the popup as many times as you'd like, this allows for a variable trial period. By contrast, sometimes a potential customer could be annoyed by a 30-day trial if they're not using the software frequently enough to properly evaluate it during those 30 days. Then they'll want to re-evaluate the software months down the road, but they can't because it's expired (happens to me all the time). It also means that the user doesn't have to register or do anything special to start the trial. They literally navigate to regexhero.net/tester and just start using the software. I think breaking down that barrier to entry has huge advantages.

And then the "Professional" version has moved upmarket to $20, and it now provides the ability to save your regular expressions locally with the desktop version. This whole Standard / Professional idea was taken right out of Dan Ariely's book. It's nothing new of course, but I never understood what influences having different product editions could make on the buying decision. If the anecdote about bread machines has any parallels to software, one could assume this will result in more sales of Regex Hero. So I'll track sales for the next couple months and post back here with the results.

UPDATE
You can read all about the results of this change in my new article, BucketSoft's First Profitable Month.